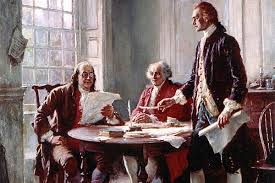 In preparation for our nation’s natal day tomorrow, I offer the following–shamelessly stolen from The Onion–for your Independence Day entertainment. Happy Birthday to us!

On the Fourth of July, citizens across the country will gather with friends and family to celebrate the United States of America and the Founding Fathers who established our democracy. Here are some facts you may not know about the founders of our country:

One thought on “Happy Birthday to Us!”