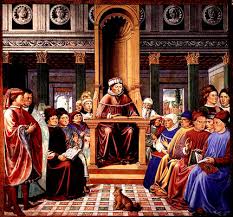 The story is told that St. Augustine used to get annoyed with his students when, as he pointed toward something he wished them to consider, they focused their attention on his finger instead. Something tells me, though, that Augustine was not that disturbed with the misdirected attention. He was the author of Confessions, after all. Now I understand fully his stature, that only the Apostle Paul had more to do with the invention of the Christian religion than Augustine. But if I were to subtitle Confessions, I would call it “Look At Me!” “Look at me as I steal a bunch of pears with my buddies for no reason!” “Aren’t you impressed with my encyclopedic knowledge of Scripture?” “My struggles with sexual promiscuity are fascinating, are they not?” “Be astounded by my intellect as I defeat the Manicheans in debate with one hand tied behind my back!” “Isn’t my mother Monica interesting, particularly because she’s my mother?”

Obviously I’m not a big fan, so perhaps I being a tad bit unfair. Every human being is born believing that he or she is the center of the universe and is continually surprised when no one else agrees. By the time adulthood comes, most of us have learned social techniques that help us manage this natural hardwiring. But there are some adult activities that regularly tempt us to continue thinking “well perhaps I’m the center of the universe after all.”

Augustine participated in two of these activities, as do I—writing and teaching.

I started thinking about this at a writers workshop a couple of summers ago in Collegeville, Minnesota, the place that has become my geographic center of spiritual gravity. I was having a ball. Essays were emerging, I saw two deer and an owl on the first day walking behind Lake Sagatagan, I had lunch with Brother John—it was all good. But I was reminded of what a foundationally selfish activity writing is. What on earth makes me think that it’s a good use of my time and someone else’s money for me to spend a week indulging in solitude, writing when I feel like it, eating when I feel like it, sleeping when the spirit moves me, strolling around aimlessly in outrageously perfect weather, with minimal structure and demands while Jeanne contends with real life at home?

in the world, why would anyone be interested in this?” The question is particularly pertinent for me when I’m writing first person essays, what the writer-in-residence at the writers workshop described as a combination of memoir and philosophy. I’ve been tiptoeing around the “memoir” tag for what I’m working on, because memoir is the literary genre that is most likely to be self-obsessed. But I do appear to be the central focus of my essays, and the first person singular pronoun is popping up a lot, so memoir it is. And why would anyone be interested in my life, my perspective on anything? Why would anyone other than my closest friends and family give a moment of attention to me? The answer is obvious—they wouldn’t. So if there is no better reason for someone to read what I’ve written than that I’m the one who has written it, then I’d better spend my time doing something else.

Fortunately, I’ve been working on this issue for quite a while now, just in a somewhat different context. I’ve been a teacher for a lot longer than I’ve been writing essays, and had to face the fact early on that teaching also has all the marks of an ego-centered activity. The whole structure of higher education is organized around the idea that students will pay thousands of dollars per year to sit regularly in the presence of experts who will, in various ways, shape and mold their young charges into something useful and marketable. I spent many years of hard work and a lot of money in order to get to be one the shapers and molders. So listen to me, and find as many ways possible to let me know how brilliant I am on a regular basis.

But that, of course, is not how learning happens. Over the years I’ve come to realize that it is vitally important for me, every day in the classroom, to remember the difference between an idol

and an icon. Both idols and icons are meant to be looked at, and as such must be capable of attracting attention. But attention is intended to stop at the idol—it is the final focus of the attention being paid. An icon, on the other hand, directs the attention through to something beyond, something other than, the icon itself.

The idol says “Look at me!”, while the icon says “Let me show you this over here.” When the classroom is at its best, the energy is iconic, not idolatrous. Augustine’s annoyance with his third century CE class arose because his students were treating him as an idol, when he was trying to be an icon. “Don’t look at me—look through me to see something greater and more interesting than any of us.”

My father, who was an itinerant Baptist minister, once told me about a plaque

on the back of a pulpit in a church where he was preaching for the first time one Sunday morning. Pulpits apparently often have sayings on the preacher’s side—“Let the words of mouth and the meditations of my heart be acceptable in your sight, O Lord my Strength and my Redeemer,” for instance. This plaque was unusual though. It bluntly asked What Are You Trying To Do To These People? And if your answer isn’t any better than “Trying to impress them with what I know, how smart I am, how spiritual I am, and how great I look in this suit,” then shut up and make it a short sermon. The same is true in the classroom and on the written page. What am I trying to do to these people, these students, those who might read this?

As I sat with the monks in the cavernous, yet intimate, St. John’s Abbey in Collegeville not long ago, the first line in our final response was “It is not you who are speaking.” It sure seems as if it is—that’s my voice in the classroom, those are my experiences and that’s my sense of humor woven into these words on the computer screen. If that’s all that’s going on, pay no attention. But every once in a while, maybe the teacher or the writer can be a point of contact between the familiar and something other, something transcendent and sacred. Don’t look at—look through. The full response at midday prayer was “It is not you who are speaking; It is the Spirit of God who speaks through you.”

5 thoughts on “Idols and Icons”