A few days ago, reports that Roy Moore, Alabama Republican candidate for the United States Senate, initiated several sexual encounters with teenage girls, including one who was fourteen, when he was in his thirties were published in the Washington Post. Political sides were taken immediately, of course—we’ve unfortunately come to accept and expect it in our fraught and fractured political times. But one defense of Moore’s alleged behavior particularly caught the attention of many, including me. Alabama State Auditor Jim Ziegler said “Take Joseph and Mary. Mary was a teenager and Joseph was an adult carpenter. They became parents of Jesus. There’s just nothing immoral or illegal here. Maybe just a little bit unusual.”

No, I’d say that what’s just a little bit unusual is for someone to use the relationship between Mary and Joseph as a justification for alleged child molestation. On the list of “Things Christians Should Get Upset About,” Mr. Ziegler’s comments should be at the top of the list. To be sure, Christians of all sorts, types, shapes, and sizes filled the airwaves and social media with such outrage, while other Christians found nothing particularly wrong with either Brown’s alleged actions or Ziegler’s justification. 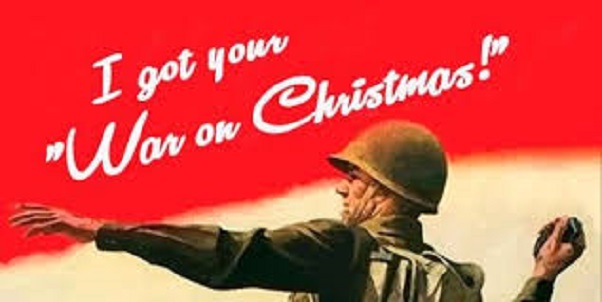 But this will pass, as all things seem to do within a couple of days. Still, there are some things that certain Christians seem to get upset about regularly, an annual outrage that’s just about to fire up for the next six weeks or so. It’s the outrage concerning the War on Christmas allegedly being waged by all sorts of non-Christians in this country, a war whose continuing battlefields include the apparent prohibition against saying “Merry Christmas” during the holiday season. This prohibition is incited by politically correct liberals, the mainstream media, atheists, persons of faith who are not Christians, and anyone who enjoys persecuting American Christians, apparently the most oppressed majority in human history.

So even though it’s only the middle of November and I, as much as anyone, hate discussing Christmas when my favorite holiday—Thanksgiving—is still almost two weeks away, let me put my cards on the table as clearly as possible. I am a Christian, and I will not be saying “Merry Christmas” this holiday season. On principle.

When President Trump was a mere candidate for the highest office in the land, he promised that if he were elected President, everyone would be saying “Merry Christmas” once again, in stores, on streets, in dens of liberal iniquity where only “Happy Holidays” has been allowed for years . . . and he’s still promising it. A bit over a month ago, he gave a speech at the “Values Voter Summit,” a conservative Christian political action group whose support he enjoyed during the 2016 Presidential campaign and apparently still enjoys. In his typical rambling, stream-of-consciousness style, he threw out chunks of red meat to those assembled—sort of like the rolls of paper towels that he pitched into the crowd when he visited hurricane-ravaged Puerto Rico.

The American Founders invoked our Creator four times in the Declaration of Independence — four times . . .

We are stopping cold the attacks on Judeo-Christian values.  (Applause.)  Thank you.  Thank you very much.  [An aside: I think he learned this from Elvis]

And above all else, we know this:  In America, we don’t worship government — we worship God.  (Applause.)  Inspired by that conviction, we are returning moral clarity to our view of the world and the many grave challenges we face.

And something I’ve said so much during the last two years, but I’ll say it again as we approach the end of the year.  You know, we’re getting near that beautiful Christmas season that people don’t talk about anymore.  (Laughter.)  They don’t use the word “Christmas” because it’s not politically correct.  You go to department stores, and they’ll say, “Happy New Year” and they’ll say other things.  And it will be red, they’ll have it painted, but they don’t say it.  Well, guess what?  We’re saying “Merry Christmas” again.

This last promise was met with a standing ovation worthy of a 60s Beatles performance, complete with sign-waving, screaming, and probably some swooning. I have to give the President credit—he knows how to choose his red meat.

I’ve lived for more than sixty years and unless my memory is failing more than I think it is, this “Merry Christmas” vs. “Happy Holidays” business was not a “thing” in my early years. I would remember if it had been. I was raised in the most Christian of all possible atmospheres, taught about the evils of godless secularism and its insidious ways of infecting our culture from my earliest days in Sunday School, and learned to be vigilantly on guard against even the slightest affront to Jesus (since he apparently has very thin skin). But no one ever taught me that saying “Happy Holidays” is a direct attack on all that is good, Christian, and American. That’s probably a good thing, because over the past few years I’ve paid attention to which phrase seems most natural to me when greeting or saying farewell to people this time of year—and “Happy Holidays” wins by a large margin. Let me count the reasons why.

The most obvious reason to say “Happy Holidays,” of course, is simply that there are many more holidays going on during the holiday season than Christmas; several of these holidays are either secular or central to religious traditions other than Christianity. Saying “Happy Holidays” is simply inclusive and polite.

But as a Christian, I have better reasons not to say “Merry Christmas,” reasons that reflect my refusal to align myself with a surface level Christianity that is light-years distant from my own faith. As noted earlier, the “Merry Christmas” debate is part of the false narrative that Christians are under attack in this country—despite no supporting evidence. If your faith is threatened or undermined by the failure of others to say “Merry Christmas,” may I respectfully submit that your faith is extraordinarily fragile.

Note that in his comments, Trump places the offending failure to say “Merry Christmas” in a department store—capitalism and buying frenzies are Americans’ favorite holiday liturgies. And Christians happily buy into the narrative, as if hearing your favorite phrase is the sum total of what Christmas means to a person of Christian faith. Curiously, but perhaps not surprisingly, Jesus didn’t come up very often at the Values Voter Summit, except tangentially, in Trump’s pledge that everyone will once again say “Merry Christmas” at our shopping centers—where we revere the one born in a manger by lining up for holiday sales.

In addition to blasphemies like Jim Ziegler’s defense of Roy Moord, what sorts of things should Christians really be upset by at Christmas? We might start by remembering that the Holy Family was a refugee family, impoverished, homeless, in need of help. Sort of like the families that this “Christian” country’s President—the thrice-married and multiply-accused sexual predator embraced enthusiastically by many “Christians”—is seeking to bar from emigrating to our great land unless they can prove their worthiness with an appropriate achievement score. Mary, Joseph, and their newborn infant child would have flunked that test. That upsets me—failing to hear enough “Merry Christmases” does not.

Christianity is difficult and challenging, because it supposed to be. It is contrary to our crudest instincts and runs counter to our basest inclinations. Marilynne Robinson points out that “Christian ethics go steadfastly against the grain of what we consider human nature. The first will be last; to him who asks give; turn the other cheek; judge not.” In response to the current tendency of many American Christians to go tribal in their litmus tests for who is Christian enough, she continues “However sound our credentials seem, we have it on good authority that the prostitutes and sinners might well enter heaven before us.” That’s fine, because such folks will probably be a great deal more fun to hang out with for eternity than people whose Christian faith is strengthened by how many times they hear “Merry Christmas” at the mall as they worship the divine infant while running up their credit card bills. Happy holidays to all!