The more I realize why my faith is important to me, the more I realize that these matters of importance don’t primarily rely on my believing anything particular about God, God’s nature, or what happens after I die. For many, coming to this conclusion would require a significant shift in what faith even means. 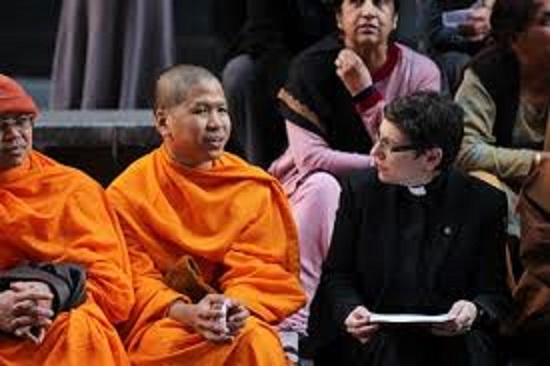 About half way through the 1989 film “Field of Dreams,” Ray Kinsella (played by Kevin Costner) and Terrence Mann (played by James Earl Jones) are in the bowels of my beloved Fenway Park. Ray has brought Terry there in an attempt to involve him in a ludicrous scheme that Mann is trying to resist getting sucked into. Mann was a major player in the 60s civil rights and anti-Viet Nam protests who now, twenty years later, is tired of being everyone’s unofficial guru and voice of the flower power generation. He just wants to be left alone. “So what do you want?” Ray asks Terry.

Ray: (gesturing to the concession stand they are in front of) No, I mean, what do you WANT?

Sometimes what we claim to want and what we really want are two entirely different things. Often our expressed desires for lofty sounding goals and achievements are, in reality, a cry for at least some sort of guidance on how to make it through our days and weeks with a modicum of our integrity and character intact. None of us comes into the world knowing how to live a good human life—all of us need as much help as possible. Last semester I worked with my General Ethics students on an article with the attention-getting title “Does It Matter Whether God Exists?” that begins with a provocative quote from John Gray, an atheist philosopher:

In many religions—polytheism, Hinduism and Buddhism, Daoism and Shinto, many strands of Judaism and some Christian and Muslim traditions—belief is of little or no importance. Rather, practice—ritual, meditation, a way of life—is what counts . . . It’s only religious fundamentalists and ignorant rationalists who think the myths we live by are literal truths . . . what we believe doesn’t in the end matter very much. What matters is how we live.

Careful there, dude—the “religious fundamentalists and ignorant rationalists who think the myths we live by are literal truths” who you are stereotyping are the people I grew up with. But Gary Gutting, the author of the article who teaches at the University of Notre Dame, observes that a religious person need not respond to someone like Gray defensively or with outrage.

It all depends on what you hope to find in a religion. If your hope is simply for guidance and assistance in leading a fulfilling life here on earth, then a “way of living” without firm beliefs in any supernatural being may well be all you need.

Gutting’s comment reminds me of something I once heard a Jewish colleague say: “Judaism is the only monotheistic religion that one can be part of and also be an atheist.” What, I asked my predominantly Catholic juniors and seniors, could my colleague have meant by that? Although such a comment was outside the normal frame of reference for many of them, they realized that, despite typical preconceptions and assumptions, there might be reasons for placing oneself in a religious tradition that have nothing to do with God. Judaism, for instance, is a way of life for my colleague, providing the traditions, practices, moral guidance, and community support that every human being seeks, at least occasionally, as we construct frameworks of meaning and purpose around our lives.

There are also many groups of Christians for whom the Christian faith is about how to live a good and flourishing human life now; the texts and traditions of Christianity undoubtedly provide a great deal of guidance concerning how to do just that. And, as the atheist quoted at the beginning of Gary Gutting’s article provocatively points out, what one believes or does not believe concerning God need not be important for such people.

I can imagine, for instance, an atheist finding a great deal of direct guidance for how to live a good human life from the Sermon on the Mount in Matthew’s gospel without feeling obligated to sign on the dotted line concerning anything about God’s existence and nature. Such guidance, of course, can be found in all sorts of place, both religious and non-religious; one’s choice of which framework to adopt will depend largely on one’s history, personality, commitments both social and political, and simply where one finds oneself most at home.

But many persons of faith want a lot more from their religion than just daily guidance for how to live a life. Gutting continues:

But many religions, including mainline versions of Christianity and Islam, promise much more. They promise ultimate salvation. If we are faithful to their teachings, they say, we will be safe from final annihilation when we die and will be happy eternally in our life after death. If our hope is for salvation in this sense—and for many that is the main point of religion—then this hope depends on certain religious beliefs being true. In particular, for the main theistic religions, if depends on there being a God who is good enough to desire our salvation and powerful enough to achieve it.

I have noted frequently on this blog my observation over the years that, for the majority of my students, the primary benefits of being a religious believer are “comfort” and “security about what happens after I die.” That’s certainly the religious world I was raised in. The people I grew up with were obsessed with “being saved,” a salvation that had a lot more to do with what happens after I die than anything that might be applicable to how to live my life today and tomorrow.

As I look back five decades and more on that world, I realize that even then I was far more interested in how the religion imposed on me applied to my daily life rather than what sort of mansion I would occupy when in heaven and what sort of harp I would be playing. Truth be told, heaven sounded pretty boring to me and I wasn’t sure I wanted to spend eternity there. I was much more interested in whether being a Christian could help me avoid bullies, find a girlfriend, and grow up to be at least a marginally well-adjusted adult.

These days I find myself thinking about atheism a lot, not because I’m thinking of becoming one (I tried that once—it didn’t take), but because the more I realize why my faith is important to me, the more I realize that these matters of importance don’t primarily rely on my believing anything particular about God, God’s nature, or what happens after I die. I don’t know what will happen after I die, and I spend a remarkably small amount of my time thinking about it, even though the amount of days I have left on earth are far fewer than the ones I’ve already lived.

Don’t get me wrong—I believe that God exists, that God is intimately interested in relationship with human beings, and that this requires something important of me. But I also believe that the values and moral commitments that are closely related to my belief in God are available to persons who are of a different faith than mine or of no faith at all. If what people of faith want out of their religion is only available to people who sign on to the very specific beliefs concerning God and more that define their religion, there is little hope for dialogue with those who do not share those specific beliefs. But if, first and foremost, what I want out of my religion is guidance for how to live a good human life now, then I am looking for the very same sort of guidance that billions of other human beings seek. That gives us a lot to talk about—regardless of what we believe concerning God.