I have been an active blogger for almost five years; as I suspect is true of many bloggers, I am obsessed with my blog statistics. One of the most important numbers provided by Google Analytics is my blog’s “bounce rate,” defined as “the percentage of single-page visits (i.e. visits in which the person left your site from the entrance page without interacting with the page).” My bounce rate tends to hang around 75-80%–I don’t know if that’s good or not, since I don’t have the nerve to ask other bloggers and risk finding out that the norm is around 25%.

Such numbers confirm something that any writer knows—writing is an inefficient and non-economical process, if efficiency and economy are measured numerically. One never knows when or if something one throws out for public consumption will hit pay dirt and actually have an impact. I was comforted to be reminded by last Sunday’s gospel that I’m not the only person who spends a lot of time in an inefficient enterprise. 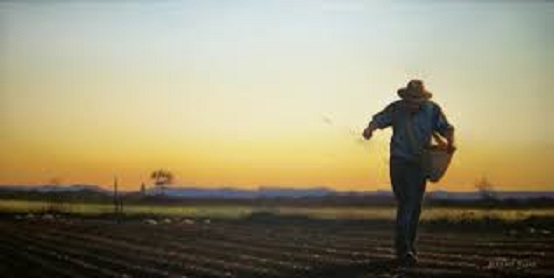 The gospel reading was Jesus’ parable of the sower from Matthew. It is one of the most familiar of Jesus’ parables, so familiar that it is easy to miss some of the most striking details. The sower is apparently just throwing seeds out there roughly in the direction of where fertile ground might be, but his activity is remarkably inefficient, based on the yield Jesus goes on to describe. If this sower had Google Analytic statistics to measure the success and effectiveness of his activity, I’ll bet his bounce rate (the total percentage of seeds that fell on the path, rocky ground, and among thorns) is at least as high as mine. But if, as Jesus’ interpretation later in the chapter suggests, the seed is the word of God, then this is just the typical divine strategy that we keep bumping into—“Let’s just throw a bunch of stuff out there indiscriminately and see what happens!”

God is no respecter of persons, statistics, focus groups, yield projections, bounce rates, or any other thing humans might devise as the best measures of effectiveness and efficiency. All you have to do is consider the extraordinary wastefulness of the way God chose to crank out endless varieties of living things—natural selection—to realize that Isaiah wasn’t kidding when he reports God as saying that “my thoughts are not your thoughts, neither are your ways my ways.”

Not only is seed scattering hit-and-miss, it is by no means certain that those who read a text will interpret it in a manner that matches up to the author’s intention. Indeed, post-modern literary theory points out that the meaning of a text is always a function of the text and what the reader brings to it—the original intention of the author may play little to no role in the text’s meaning for the reader. Furthermore, the author’s intent should not be looked to as a standard for correct interpretation, even if we know what the original intent was. I’m actually very comfortable with this, but found out over the past week that a lot of people aren’t.

Last week I posted an essay that explored the new territory opened up if one reads “light” as a noun (as in “source of illumination”) rather than as an adjective (as in “not heavy”) in Jesus’ claim that “My yoke is easy, and my burden is light.”

The Burden of Light

Several Facebook commenters warned against wandering from the literal meaning of a text, even if that wandering leads to interesting ideas and applications. For example:

A couple of commenters went to the trouble of providing the actual Greek text in their comments (ο γαρ ζυγος μου χρηστος και το φορτιον μου ελαφρον εστιν), noting that the word ελαφρον is an adjective and means “not heavy”; the Greek word for “light,” φῶς, is not in the passage at all. The word play I was having fun with, in other words, is available only in English translation. The commenter was not pleased when I said, in essence, “I don’t care.”

Someone else picked up on the “only in English” issue:

And so it went. I really am not as cavalier about an author’s intention as it might sound, but I realize—as the parable of the sower points out—that once the seed is out there, what will happen is pretty much out of the sower’s control. And, despite the protestations of any number of Facebook commenters, I’m really okay with that (and so, apparently, is God). One particular person wouldn’t stop pushing back, eventually suggesting that I wouldn’t like it if it turned out that something I wrote had been as badly misinterpreted as I was misinterpreting “My burden is light.” Before I had a chance to respond, someone responded much more eloquently than I ever could have.

Every day when I throw new e-seed out there, as well as on days when I throw out recycled e-seed, I am imitating a divine activity that makes no sense but somehow occasionally produces fruit in the most unexpected and unpredictable places.