Anne Lamott is one of my favorite authors; perhaps the best compliment I have ever received is when a friend and colleague told me that my writing on my blog reminds him of Lamott’s writing. So when her latest book, Hallelujah Anyway, arrived from Amazon a few days ago, I immediately started reading. I was pleased to read on page two that one of her go to people in times of confusion and uncertainty is a touchstone that she shares with me–the Old Testament prophet Micah. 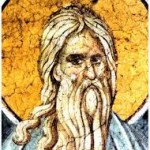 In Anne’s imagination, Micah “must have looked like a complete stoner or a Game of Thrones extra and smelled like a goat,” but he asks a simple a profound question that I have never been able to shake since I heard it in Sunday school decades ago. What does the Lord require of you?  Sometimes it helps to make the question even more specific, especially in times of economic inequality and injustice: What are the responsibilities of those who have to those who do not have?

This simple question drives much of the debate between competing economic systems—it becomes even more pressing when placed in the of faith. Comparatively speaking, most of us fall into the category of “haves,”

yet we know that in our very communities there are those who are “have nots,” those who do not have regular shelter and do not know where their next meal is coming from. My students and I frequently talk  about the strange and peculiar strategy God has chosen to spread divinity throughout our troubled world, a strategy that hands the responsibility for bringing God into the world completely to us. In a continuing incarnational plan, God chooses to engage with the world in human form.

So the question “What does the Lord require of us?” takes on even greater importance since for all intents and purposes, we are it. I have the opportunity to use one of my favorite New Testament texts in seminar every fall with largely parochial-school educated freshmen who are under the false impression that they pretty much know everything that they need to know about the Bible. In this text, one of Jesus’ parables, you have this crazy vineyard owner who pays everyone the same daily wage no matter how long they have worked, from a full day’s labor to just an hour or so. The workers aren’t unionized, it is clearly a “supply and demand” and “hire and fire at will” situation, so what is going on? What is this vineyard owner up to? My students bristle at his apparently caval

ier attitude toward the rule that people should be paid in proportion to the amount of work that they do, a rule so ingrained in our Western, Protestant-work-ethic assumptions that any apparent violation is not only a mistake, it’s an economic crime. “This guy sounds like a socialist!” several of my students complained, as if that in itself was a devastating argument against how the vineyard owner is choosing to distribute wages. And on the surface, at least, these students had a point.

The situation described has a very contemporary feel to it. People out of work gather at an agreed location in the hope that they will be one of the few picked when bosses with work available arrive at the crack of dawn. Those looking for work might not have proper documentation, might be illegal immigrants—whatever their situation, they are not blessed with the security of regular employment. The vineyard owner or his representatives arrive at dawn, agree with the handful selected to work on the wages that will be paid for a day’s labor, and those who are not selected are left unemployed for yet another day. But the harvest is ready to be gathered, and the owner returns every three hours, at 9:00, at noon, and at 3:00, hiring more workers each time. 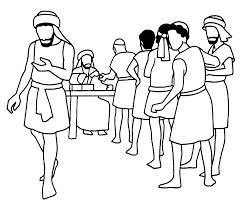 Even at 5:00, a few more are grabbed from the marketplace to help make a final push in grape-harvesting for the final hour of the work day.

Only when wages are paid do things get really interesting. We know what the vineyard owner does—he pays all of the workers the same amount of money, no matter how long they worked. Why does he do this? Is it because, as my students suspected, he has bought into a social and economic experiment that forces him to pay everyone the same, no matter how hard or long they have worked? No—when he responds to the complaining laborers who have worked all day and have just been paid the same amount of money paid to the one hour people, it is clear that this is no economic innovator or radical:

Friend, I am doing you no wrong; did you not agree with me for the usual daily wage? Take what belongs to you and go; I choose to give to this last the same as I give to you. Am I not allowed to do what I choose with what belongs to me?

So why does he distribute wages in such a non-capitalistic way? In the Kingdom of Heaven, which is the kingdom that it is the responsibility of all of us who profess to follow Jesus to establish on earth now, familiar rules are not eliminated.

Rather, they are transformed. With Kingdom of Heaven eyes, he sees something more important than profit—he sees that at the most basic level, all human beings share the same needs. A daily wage is meant to meet daily needs—and each person has these needs regardless of how long they work. The vineyard owner never asks why his workers were unemployed, nor does he ask why some of them never were available for work until late in the day. These details simply do not matter. What does matter is that each of the workers at the end of the day needs the same things, and the vineyard owner chooses to satisfy those needs out of his own money. In the opinion of those who worked all day, they deserved more than those who came late. In the eyes of the landowner, all deserve a daily wage because all have the same needs. It turns our expectations upside down and violates our comfort zone. But that’s how things work in the Kingdom of God. The more you own, the more opportunity you are provided to give it away. 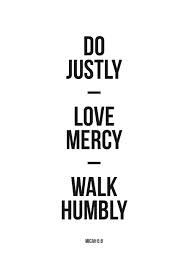 The genius of the vineyard owner in the parable is that he is an embodiment of Micah’s directive. The vineyard owner embodies humility because although technically the profits from the vineyard belong to him, he understands that everything we have is a gift, and that the only possible response to such generosity is to channel the generosity outward. He understands that justice is never spread evenly in terms of talents, wealth, abilities or anything else—it is our responsibility to create, just as he does at the end of the work day, a world in which all human needs are responded to equally, regardless of which humans have the needs. And he is merciful because he sees his laborers not as necessary cogs in the money-making machinery, but fellow human beings with whom, at least for this day, he can share his abundance willingly and liberally. Justice. Mercy. Humility. That’s what the Lord requires of us. Let’s give it a shot.