Ten years ago this summer, I attended a writers conference for the first time in my life–I signed up at Jeanne’s urging (and against my better judgment). My workshop was “Literary Essay”; each of the fifteen members wrote daily 500 word essays, which were submitted to colleagues for critique and (hopefully) helpful evaluation. My essays tended to praise the virtues of my dog and the Boston Red Sox, while frequently expressing struggles with faith, God, religion, and my own very human inadequacies. Little did I know that this first foray into short essay writing was the beginning of a multi-faceted process that would change my life. 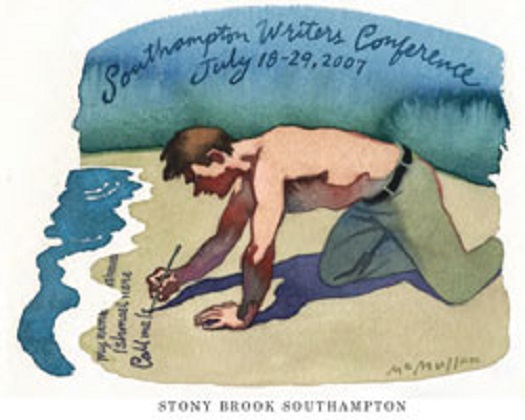 On the final day of the ten-day workshop, each participant capped her or his experience with a two-minute public reading of something they had written during the workshop. It was a bit intimidating–I was used to speaking in front of large groups of people (200+ in this instance), but had never brought such a personal, intimate piece of writing to the attention of so many without lots of editing. Here’s what I shared with the group:

I have unexpectedly fallen in love with a real bitch. She’s cute, with dark brown eyes and medium brown hair. Although I generally prefer long hair on a female, she wears her hair extremely short and it works. She tends to bite me when she gets overexcited while we’re playing, but I still find her pearly white teeth very attractive. Although she’s willing to allow a ménage à trois when my wife is home, she prefers it being just the two of us in bed. Her name is Frieda.

This is a new experience for me. No one has ever looked at me with a gaze that says “you were put on earth just for me.” No female has ever marked me as a love interest and dared me not to love her back. This is the first time I’ve been chosen before I knew I was even being considered. And it’s not as if Frieda doesn’t have lots of options for love interests. Everybody loves Frieda—she’s extroverted and assertive, yet can be warm, demure, and submissive. She can take over a room just by walking into it, yet is happy to spend hours being quiet doing whatever you’re doing. She is fluent in both English and German. Her profile would be a killer on eharmony.com. 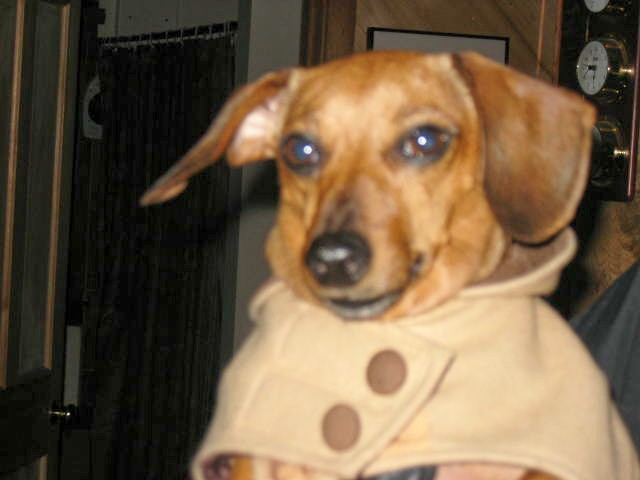 I never thought I’d fall in love with a dog. I’ve always been a cat person; there’s been at least one cat in my life consistently ever since I was ten years old. A cat is a perfect pet for an introvert; they clearly would prefer to be left alone most of the time and will only socialize when it is their idea. There’s something edgy about even the most domesticated of cats, as if it just crossed the line from its wild ancestors and might cross back at a moment’s notice. It takes time and effort to get to know a cat—time and effort on the human’s part, that is. The cat couldn’t care less. Self-reliance, independence, confidence, a sense of mystery and aloofness—I find much to admire in a cat.

Dogs are a different story; not so much to admire. Dogs are so obsequious, as if canine completeness requires human approval.. But Frieda didn’t and doesn’t need me—she chose me, out of the blue. Frieda is part of the four animal menagerie who arrived when my son and daughter-in-law moved in, joining the two geriatric animals already in the house; she decided early on that I was going to be hers. I’ve seen animals attach themselves to a single human before (usually my wife, a dog person). Not to me, though. So the “click click click” of toenails behind me everywhere I go, an enthusiasm when I come home so over the top that I worry about her health, having a canine jammed in next to me everywhere I sit, a 10 ½ pound dachshund trying to spoon with me in bed—these are new and sometimes disconcerting experiences.

I once saw a bumper sticker that said “I want to be the person that my dog thinks I am.” Not me—that’s too much pressure. No human being could possibly deserve the rapturous upside-down look Frieda occasionally gives me when she’s laying next to me or on my lap, just making sure that I’m still there. Of course such reverence is easy for Frieda—she doesn’t know about all the ways in which I am unworthy of unconditional love. That’s one of my great fears—what if they (my wife, my sons, my friends, my students—anybody) knew the truth about me? Frieda doesn’t know the truth about me, and that’s why she’s attached to me at the hip. She doesn’t know any better.

I learned as a kid in Sunday School that grace is “unmerited favor.” Divine grace is something I don’t deserve, a gift I cannot earn, bestowed simply “because.” Over the years, grace has evolved for me into “God knows that you’re a shit and a loser, but chooses to forgive you and to love you anyway.” Today I’m thinking that grace is more like Frieda. The miracle of grace is not that “you are unworthy but I choose to treat you as if you are worthy,” but “you are worthy.” Not “I love you in spite of,” or “I love you because of,” but “I love you.” If there is, somewhere in the universe, a transcendent grace and love like that, I am in awe.  That’s something worth believing and having faith in. That’s a thread of possibility that should be followed in order to see where it leads. Of course, Frieda’s just a simple dog and doesn’t realize that her standards are ridiculously low. But as Leonard Bernstein wrote in Mass, “Sing like you like to sing/God loves all simple things/For God is the simplest of all.”

The editor of a small magazine heard my essay and approached me later that day, asking if I would be willing to let her publish it–it became my first non-academic publication ever. Two years after the workshop I experienced a life-transforming sabbatical where I began writing exploratory essays in the mode of my first forays at the workshop. Five years later, exactly five years ago today, “Hail Frieda, Full of Grace” was the first of now more than 800 posts as I ventured into the strange and wonderful world of blogging.

I have written about a number of interconnected themes on “Freelance Christianity” over the past half-decade, none of them more important than the one I first shared ten years ago with my fellow workshop participants. Is there somewhere in the universe a transcendent grace and love that welcomes me with open arms and asks only for my response? My continuing answer is “Yes”–but the details are still something I’m working on.

Frieda and I are both ten years older–she carries her now thirteen-year-old self with the same extroversion, personality, and grace that I celebrated in my original essay. She’s 13 rather than 10.5 pounds. She has almost as much white hair as I do. She’s still my muse, my constant companion, and I still hope that she outlives me (since I don’t want to deal with what I’ll be like if she doesn’t). 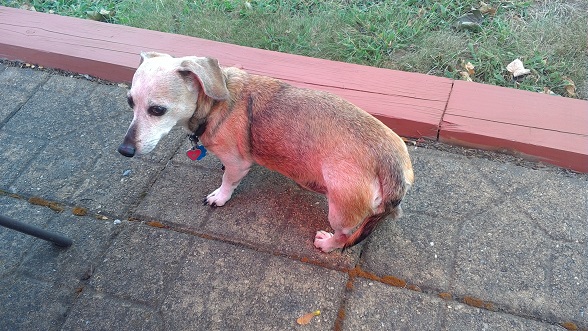 Ten years on, I realize that I am a very different person than I was at that workshop, different in ways I could never have predicted. I’m grateful for the essays, for Frieda, for Jeanne, for change, and especially for my increasingly stronger conviction that there’s a lot more going on in me and around me than I could ever imagine. I thank those who have shared this journey with me in many different ways, and invite you to join me going forward.