Defend the poor and fatherless;
Do justice to the afflicted and needy.
Deliver the poor and needy;
Free them from the hand of the wicked. (Psalm 82)

In his 2006 Christmas sermon at Canterbury Cathedral, then-Archbishop of Canterbury Rowan Williams tells the story of a visit he made the previous week to Holy Family Hospital in the Palestinian West Bank as part of an ecumenical pilgrimage with the heads of several other Christian denominations in Great Britain. Holy Family Hospital has the best-resourced maternity unit in the whole of the West Bank, equal to the best in Israel. But because of the current storms of political conflict within Palestine, as well as the local Israeli and international economic sanctions against the Palestinian government, no one on the hospital staff is sure from day-to-day where funding for next month’s salary is coming from.

As Rowan Williams held a new-born baby in his arms, an infant who had been abandoned by the side of the road by his mother and brought by a stranger to the hospital, he asked Dr. Robert Tabash, the medical director of the neo-natal unit, what keeps him and his staff going in the face of challenges that often must seem insurmountable. “What we are doing here is important,” Dr. Tabash replied, “because the poorest deserve the best.” Period. Simple as that. Continuing with his sermon after telling this story, the Archbishop asks those congregated in Canterbury Cathedral “When you hear that, I wonder if you can take in just how revolutionary it is . . . this is probably the most radically unique thing Christmas and Christians bring into the world.”

As we begin yet another of the seemingly endless elecion cycles, as our elected officials threaten to allow the government to close down yet again–this time over the funding of Planned Parenthood, hamstringing or eliminating important social programs, it is more pressing than ever to ask what is to be done about our fellow citizens who are poor and disenfranchised, the ones upon whom the worst falls once again as we posture in favor of our preferred political and social agendas. As Rowan Williams points out, for those of us who claim to be guided by Christian principles, the Gospel message is clear. From the Beatitudes to the Sermon on the Mount, Jesus never wavers from the message that in the divine economy and social structure, the poor, the widows, and the orphans—the disenfranchised and those who continually fall through the cracks, in other words—are to be considered first. If there is one thing that guarantees divine judgment,

it is the failure to show paramount concern for “the least of these.”

And yet even Jesus, who himself was born into abject poverty and remained there his whole life, was fully aware of just how intractable these problems are. In the Gospel of Mark, we find Jesus dining at the house of Simon the Leper, the very definition in that culture of an outcast. A woman arrives with an alabaster jar containing nard, a rare and expensive ointment. She breaks the jar and anoints Jesus’s head with the ointment, inviting well-aimed criticism from the disciples and others. “Why this waste of perfume?  It could have been sold for more than a year’s wages and the money given to the poor.” And these critics were absolutely right—in their understanding of Jesus’s teaching, this was a violation of what has come be known as the “preferential option for the poor.”

Which makes Jesus’s response all the more shocking and confusing. “Leave her alone. Why are you bothering her? She has done a beautiful thing to me.

The poor you will always have with you, and you can help them any time you want. But you will not always have me.” Not exactly what the group at dinner expected, I imagine. What is he talking about? How to explain this apparent moment of self-centeredness? I have heard many theological explanations for Jesus’s dismissive comment about the poor; I have even heard this very scene twisted into a justification for not funding social programs intended to help those in need. And I don’t have a good explanation for why Jesus is throwing the very persons he raises to blessedness in the Beatitudes under the bus.

In our world we so often connect help for those in need with a prior explanation of why they are in need. If you are in trouble through no fault of your own, then perhaps I’ll help. But if you are in need because of your own bad choices or laziness, then you’re on your own. Still, the call to raise the disenfranchised to primary attention does not ask why—it simply says “whatever you did for one of the least of these brothers and sisters of mine, you did for me.” What makes the poor so special? Why do they deserve the best?

The very existence of the poor, and the stubborn resistance of poverty even in the face of our best efforts to make their situation better, is a continuing reminder that every time we attempt to address the intractable problems of the human condition with yet another economic/social program or redistribution, we run straight into our own poverty.

Every line we draw is partially drawn out of fear. Every wall we build to defend ourselves and keep out what we are afraid may destroy us is also a wall that keeps us in, a wall that will change us in ways we did not choose or want. Every human solution to fears and threats generates a new set of fears and threats. As soon as we try to sort out who we will empower and give the advantage to, we also identify who we are against; and that will undoubtedly create another round of poverty and anger and bitterness. Perhaps it is time to realize that the message of the gospel cannot be legislated or brought into existence through political action. What is required is far more personal.

Why do “the poorest deserve the best”? Not because they are in some strange way better than those who are not poor. The poorest deserve the best because, bottom line, all of us are incurably impoverished. Humanity itself suffers from poverty, the moral and imaginative poverty that time and again reproduces the same patterns of fear and violence. Despite our delusions of independence and self-made success, not one of us, not even the most financially secure and successful or confident law keeping and godly person, can in truth look after ourselves. The genius of the Christian narrative is that this is not only okay, it actually is the reason that God became human. In Deuteronomy, God tells the children of Israel that they have been chosen precisely because they are slaves and exiles 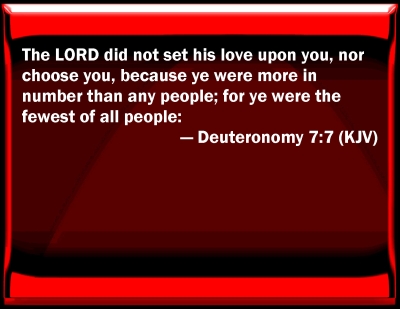 , the most helpless community on the face of the earth. And this is why the poor are to be preferred—they are a constant reminder of the basic condition we all share.

This is also why we will always have the poor with us, why they will always stubbornly resist our best efforts to solve their problems. The poor will always be with us because we cannot escape our collective human impoverishment with exclusively human tools and strategies. Our giant goes with us wherever we go. The divine response? God does not let us have what’s left over from the grace given to holy and honorable people. God doesn’t look around for some small bonus that might come from the end-of-year surplus in the budget.

God instead becomes one of us, an energizing force for change and reform that we cannot even imagine. As Archbishop Williams reminds us in his Christmas sermon,

The truth doesn’t change, “the truth sent from above,” about our own universal ruin and restoration and about what that lays upon us when we look at the various specific poverties we confront in our human family. We revert so readily to the idea that love must go where merit lies, that help must follow merit and achievement. But God apparently thinks otherwise.